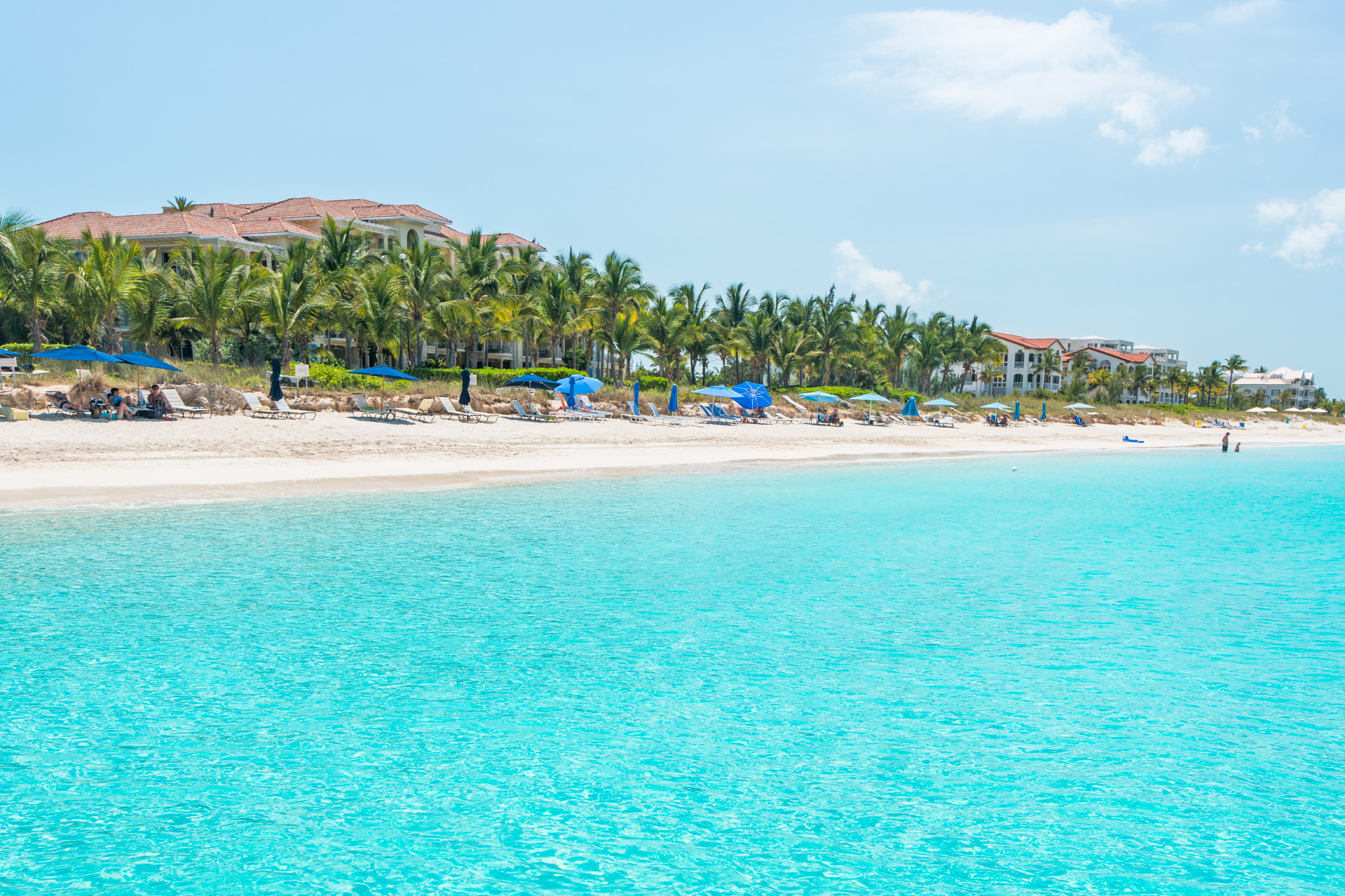 Recognized as one of the hottest island destinations in the world by nearly every top organization and magazine that rates them, The Turks and Caicos Islands is a must visit vacation spot for those seeking a high-end vacationer’s paradise. The Islands are sometimes called TCI for short, and are a British Overseas Territory.

The Atlantic tropical island chain consists of the larger Caicos Islands and smaller Turks Islands, which are two groups of tropical islands in the Lucayan Archipelago of the Atlantic Ocean and northern West Indies. The 20 mile (32km) wide and 5000 foot (1.5km) deep Columbus Passage divides the two island groups. Turks and Caicos sits southeast of Mayaguana in the Bahamas island chain and north of the island of Hispaniola and the other Antilles archipelago islands.

The islands have a total land mass of 170 square miles and is about 647 miles east of Miami. The total population of this island nation is about 35,000 residents and about 24,000 of them live on Providenciales in the Caicos Islands.  The capital of the country is Cockburn town which is located on Grand Turk Island and Turks and Caicos is renowned as an off-shore financial hub and of course for its ability to attract and satisfy high-end tourists looking for a once in a lifetime vacation.

The History of Turks and Caicos 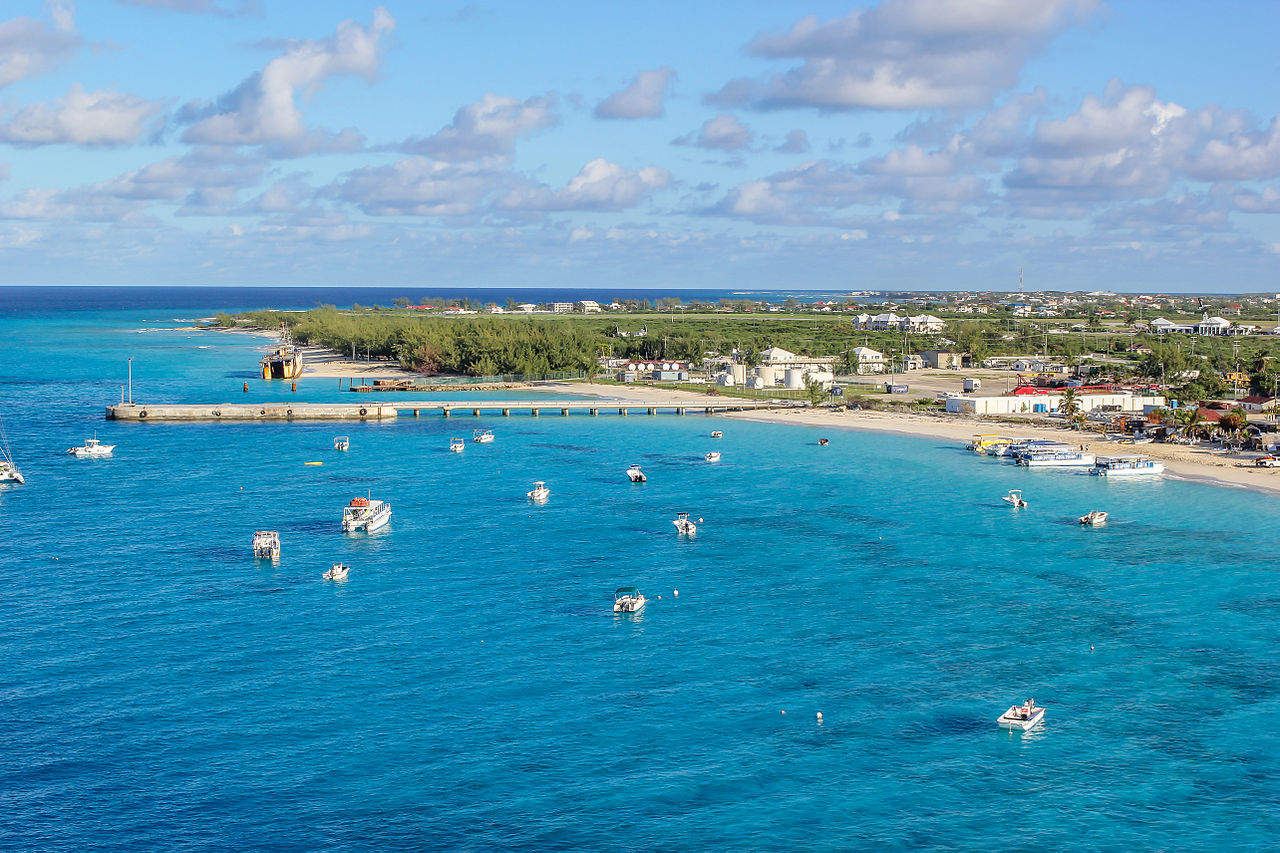 The country has a storied history with control and oversight of it being handled by different country throughout its history. Europe took sight of the country in 1512 and the British Empire gained control in shortly thereafter. Turks and Caicos was governed by Bermuda, then the Bahamas, and Jamaica with each adding a bit of its own culture into the local culture that existed on the island. In 9173, the island elected its first governor and became an autonomous British Overseas Territory since. The language of the country is English and the US dollar is the official currency.

The islands that are Turks and Caicos are small compared to many other islands in the Caribbean. They also have low elevation with only mild hills on certain islands. The terrain is made up primarily of drought resistant tropical dry forest and marine wetlands.

Surprisingly, Turks and Caicos does not have a heavy annual rainfall. In fact, the country has one of the lowest annual rainfalls in this overly wet region.  What this means if for visitors is that the country has one of the highest amounts of sunny days of any country in the region and great average annual temperature. Except for the occasional passing of a storm, the weather and conditions for activities on and in the water is typically excellent throughout the year. Average annual temperature throughout the year runs between 75° F to 95° (24° C to 35° C) Average temperature is 80° F.

The Turks and Caicos Islands Today

The economy of the TCI is heavily dependent on tourism, and over the past decade real estate development and the export of seafood has emerged as growth industries. The island is known as a great place to do some banking and there are a wide variety of financial services are available, including company formation, offshore insurance, banking, trusts, limited partnerships and limited life companies. The company has a very aggressive Financial Services Commission which regulates, develops and promotes the industry in major markets around the world.

For tourists however Turks and Caicos today is laid back island retreat that has become a playground for high end fun and sun lovers. The island chain is magnetic attracting celebrities and high end tourists and those who want to have a vacation to remember. .

Highlights of Turks and Caicos

For those who wish to plan a vacation to Turks and Caicos you will find a beautiful country that has received numerous prestigious honors recently all related to its beauty and quality as a destination. A few of their accolades include:

Places to Visit on Turks and Caicos

More often called Provo, is the most developed island in this island nation. At 38 gorgeous miles, it is where most international flights come into the country through the Providenciales International Airport. The island boasts white sand beaches throughout and some of the most abundant sun in the Caribbean. The island also has a championship level golf course, top restaurants, spas, lots of great shopping and of course some of the top resorts in the region. Scattered throughout the island are lots of great amenities mostly based around water sports. You can watch dolphin shows with the kids, swim and snorkel and rent private yachts to tour the island or the entire island chain. 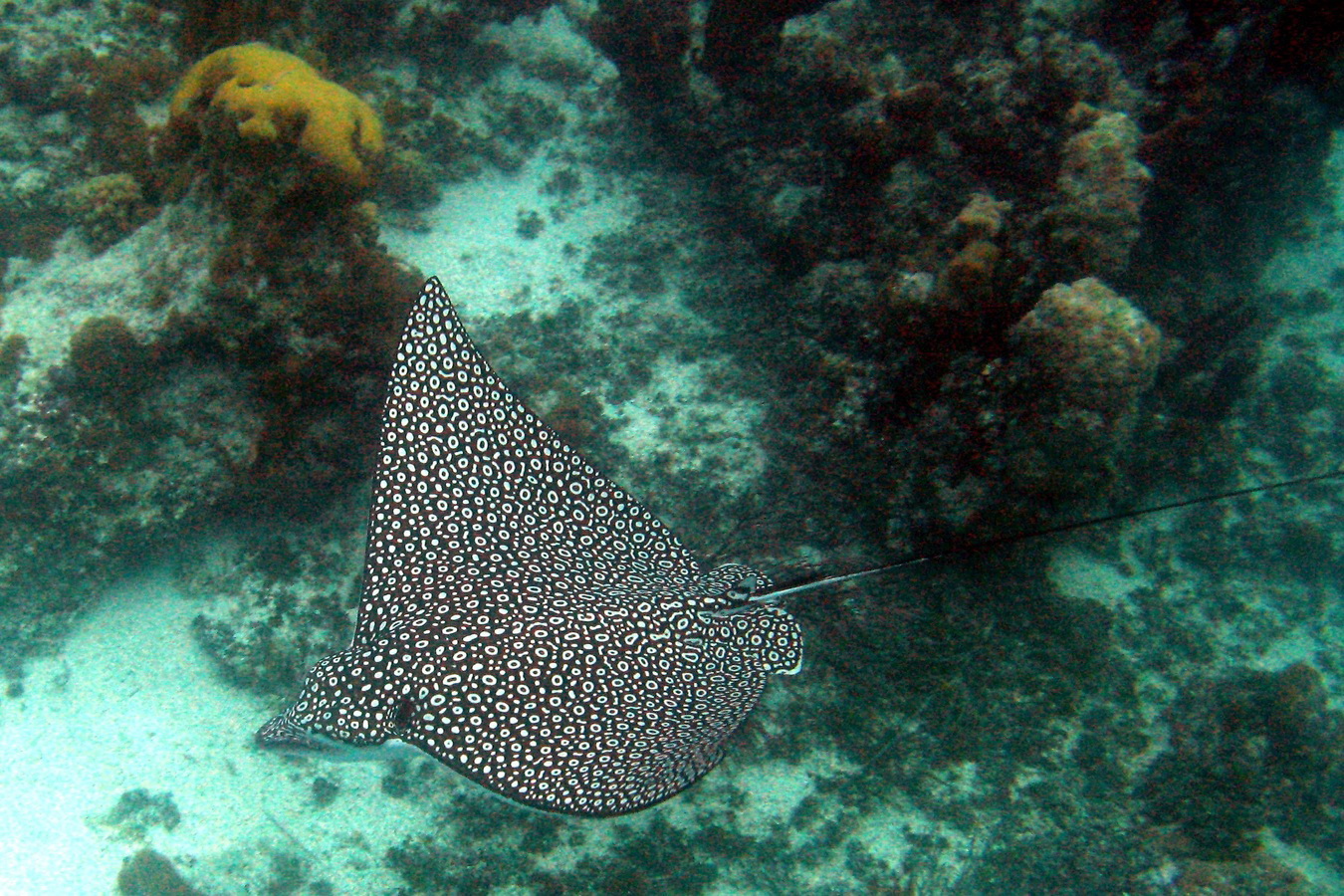 Providenciales is also where Provo Beach is located. Often recognized as the world’s best beach. On the North shore of the island is award winning Grace Bay which has beautiful beaches, as well as a long coral reef, that is brimming in ocean life. This main stretch is home to most of the island’s major resorts and tourism services. In the south of the island are beautiful areas to consider including Sapodilla Bay, Copper Jack, Discovery Bay, Turtle Tail, Long Bay and Chalk Sound, which has the bluest water and beckons you to explore its many cays. You can find the most beautiful villas and private homes for rent in this part of the island. 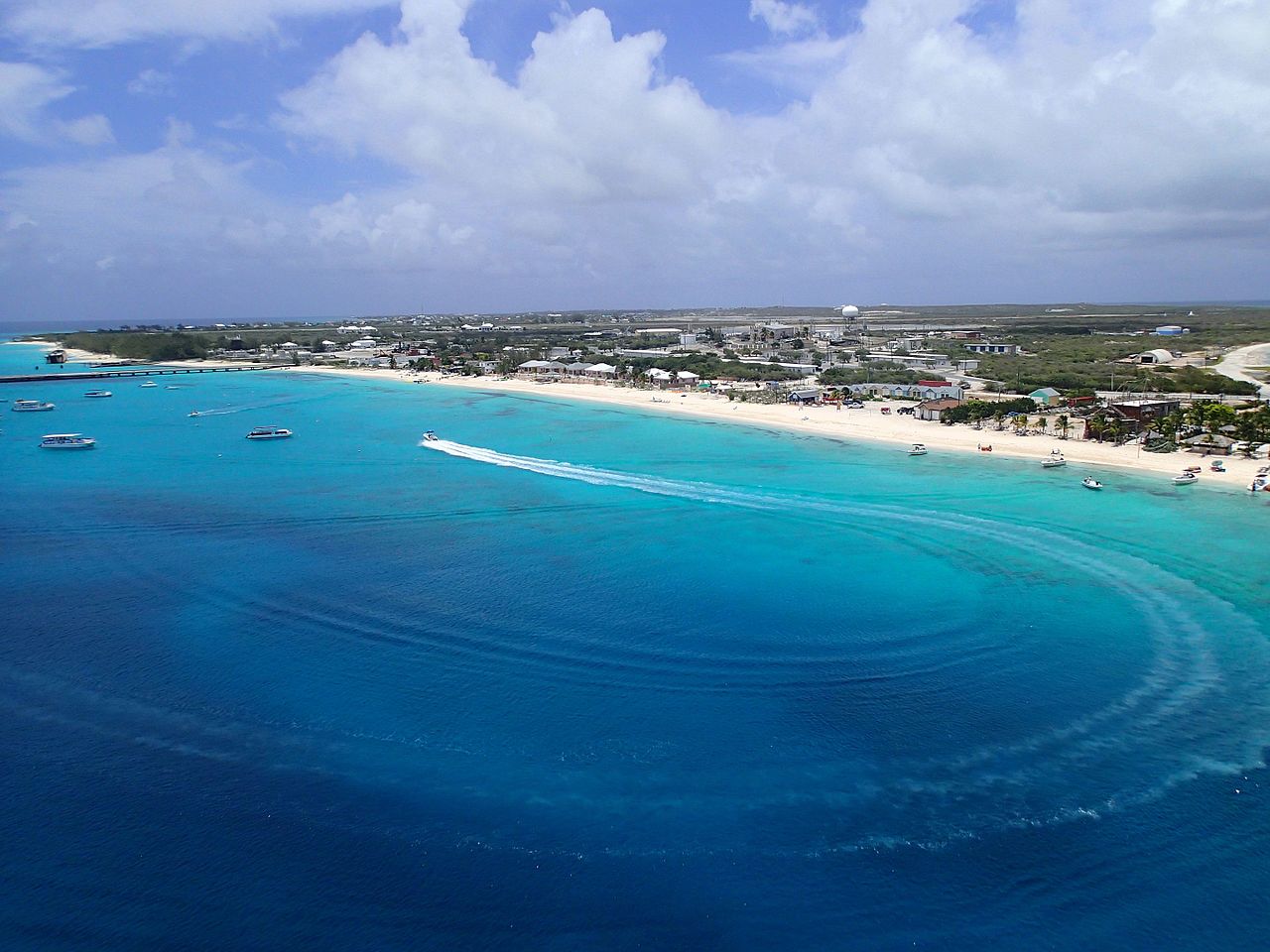 The capital island of the Turks and Caicos is called Grand Turk. It is the historical and cultural hub of the country and contains the government and main services for the country. The heart of the island is Cockburn Town which looks like an old American town with its well preserved rustic colonial architecture and laid back mood. This small town only has about 1700 residents and houses the Turks and Caicos National Museum.

Visitors come here for a slightly slower pace than Providenciales but who also love diving and snorkeling. The island has a coral reef that is one of the best in the Caribbean and goes down to 8,000 feet. There are many dive companies that take out tourists to see what some describe as the most beautiful coral in the world. The island also is a whale watching hop spot. Humpback whales pass this island on their way out to deeper ocean. The island is also filled with local restaurants that serve casual eaters the best local fare.

Grand Turk is also where cruise ships also come into the country. The Grand Turk Cruise Center can accommodate to large post- Panamex class cruise ships simultaneously. The pier is connected to a recreational center that includes a swimming pool, 1,000 feet of beachfront, cabanas, lots of shopping and the largest Margaritaville in the world.

The island has many beautiful resorts of all price ranges that sit on the beautiful white sands beaches and there are uninhabited areas that you can explore throughout your time here. Some say a vacation here is a step back in time to when you had more time to simply relax.

Turks and Caicos has become a primary destination for those who like want to have a beautiful and relaxing vacation where you are pampered.